As many know, knitting is “my thing.” When I’m stressed I can knit something in my head and it relaxes me. I can stare a picture of beautiful yarn the way a foodie would study a picture in Gourmet Magazine. I know, it’s strange. Only my fellow fiberaholics can understand.

I knit on and off through college and after I got married. In 2008, I found Ravelry. Knitting became an obsession in my life again and I haven’t stopped. It helps that I have a yarn store less than 10 minutes away and have a whole bunch of real-life friends who are as serious about knitting as I am.

In late 2009 I knit a pattern from the Fall 2009 issue of Knitscene magazine. As everything else I knit, I logged it in Ravelry. In the middle of knitting the project the designer, Mathew Gnagy, emailed me through Ravelry to say that there was a mistake in the printed pattern and if I gave him my email address he’d send me the correction since the magazine hadn’t printed the errata yet.

That’s what’s awesome about Ravelry. The people who make the yarn and the patterns are also members, and they can communicate with the folks who do their work and see and comment on their progress. This wasn’t the first time I had direct communication with a designer due to Ravelry.

Mathew sent me the correction. I quickly realized that the correction needed correction and Mathew and I had a nice email exchange about his pattern. He then asked me if I had ever done any sample knitting. I had not, but I expressed willingness to try.

A few weeks later he sent me a box of yarn, a very rough pattern and a full size schematic of the design. Communicating entirely through email and sending him pictures taken on my phone, I completed the sweater pieces, taking notes on stitch counts and making changes as we went along based on Mathew’s feedback. I sent the finished knit pieces back to him and he assembled them into the final garment.

Then Mathew signed a book deal with Interweave Press! Along with a number of other knitters, I signed on to knit for the book. That book is Knitting Off the Axis, available now at a bookseller near you! 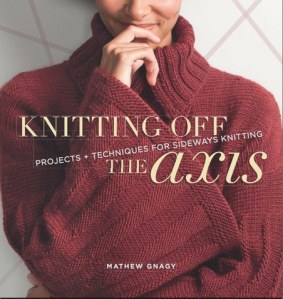 In the end, I knit 4 of the sweaters photographed for the book, including the cover. 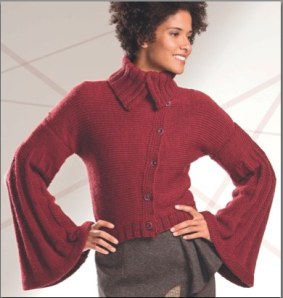 This was actually the last of the sweaters I knit for the book. As it was late in the book prep process, time was tight. I knit the pieces for this sweater in just 5 days!

I knit Deille before beginning the book project with Mathew, so glad it was included. There’s a bunch of pretty details in this jacket that the photographs don’t accurately capture. 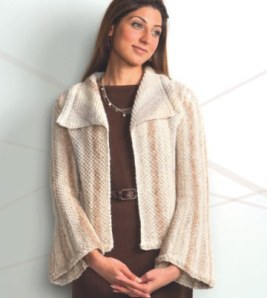 Next was Merielle. In the description, Mathew notes: “this design was literally turned 90 degrees on its side. I had planned a bottom-up dolman, but as i pinned together the first incarnation for a fitting, I accidentally folded one of the fronts along the center—what was once a hem became a wrist and the cable ran up the arm rather than up the front. instead of a hip-length dolman, I had a cropped jacket with a triangular silhouette. internal shaping produces the great angle of the body; a shawl collar adds warm style.” That bottom-up dolman was the first piece I knit for him. Mathew noted to me that he loved the way it looked when he accidentally pinned my pieces to his dress form in the wrong direction, and this is the evolution of that idea: 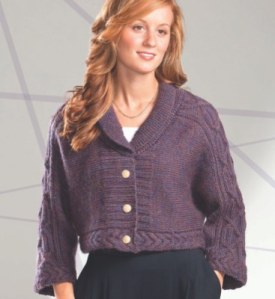 And finally, there’s Meredith. What’s most interesting about Meredith is how much of a mystery it was. I remember knitting it. I remember loving the detail at the elbow. But this was one piece where I just had to trust the process, trust the schematic and know that Mathew would make something beautiful out of what I sent back to him. 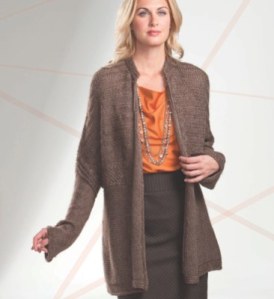 When the book came out, I had to look back through my notes to remind myself that I did  knit that sweater! Here’s an in-progress photo from the elbow detail knit in September 2010. I also remember how feathery and beautiful the Tivoli yarn is. 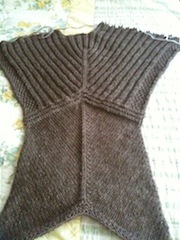 I’m so proud of Mathew and his success in his first book. After nearly well over a year of working together, we finally met in person for the first time this past January in New York City. Since then I’ve worked with Mathew on an afghan blanket pattern that appeared in a Knitscene magazine: 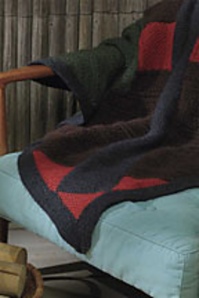 And on a sweater that is in a new “Best of” Knitscene book: 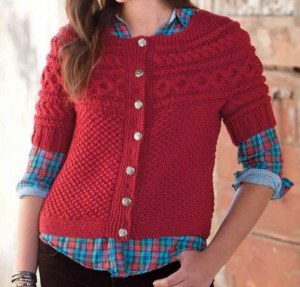 I have another sweater sitting on my lap right now that should be done in the next day or so and will hopefully be published somewhere soon (can’t say what it is or what it’s for yet).

Even when I was doing graphic design work, I preferred the production side of the process to design. I much prefer taking other people’s ideas and layouts and making them “real.” So this work allows me to do what I love (knit!) and plays to my strengths. Can I make a career out of knitting samples for designers? No. But it did help feed my yarn habit over the past couple of years.

You know you want to tell someone: